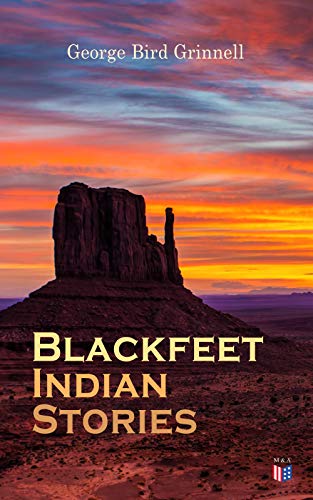 The Blackfeet were hunters, travelling from place to place on foot. They used implements of stone, wood, or bone, wore clothing made of skins, and lived in tents covered by hides. Dogs, their only tame animals, were used as beasts of burden to carry small packs and drag light loads.
The stories here told come down to us from very ancient times. Grandfathers have told them to their grandchildren, and these again to their grandchildren, and so from mouth to mouth, through many generations, they have reached our time.
Those who wish to know something about how the people lived who told these stories will find their described in the last chapter of this book.
Contents:
Two Fast Runners
The Wolf Man
Kŭt-o-yĭs´, the Blood Boy
The Dog and the Root Digger
The Camp of the Ghosts
The Buffalo Stone
How the Thunder Pipe Came
Cold Maker's Medicine
The All Comrades Societies
The Bulls Society
The Other Societies
The First Medicine Lodge
The Buffalo-painted Lodges
Mīka´pi—red Old Man
Red Robe's Dream
The Blackfeet Creation
Old Man Stories
The Wonderful Bird
The Rabbits' Medicine
The Lost Elk Meat
The Rolling Rock
Bear and Bullberries
The Theft From the Sun
The Smart Woman Chief
Bobcat and Birch Tree
The Red-eyed Duck
The Ancient Blackfeet