Humans: A Brief History of How We F*cked It All Up (English Edition) por Tom Phillips 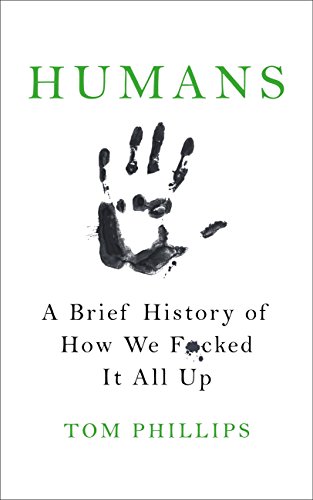 Tom Phillips con Humans: A Brief History of How We F*cked It All Up (English Edition)

'Witty and entertaining' Sarah Knight, The Life-Changing Magic of Not Giving a F*ck

'Tom Phillips is a very clever, very funny man . . . This history of failure cheerfully reminds us that humans are mostly idiots' Greg Jenner

AN EXHILARATING JOURNEY THROUGH THE MOST CREATIVE AND CATASTROPHIC F*CK-UPS OF HUMAN HISTORY, FROM OUR VERY FIRST ANCESTOR FALLING OUT OF THAT TREE, TO THE MOST SPECTACULAR FAILS OF THE PRESENT DAY

In the seventy thousand years that modern human beings have walked this earth, we've come a long way. Art, science, culture, trade - on the evolutionary food chain, we're real winners. But, frankly, it's not exactly been plain sailing, and sometimes - just occasionally - we've managed to really, truly, quite unbelievably f*ck things up.

From Chairman Mao's Four Pests Campaign, to the American Dustbowl; from the Austrian army attacking itself one drunken night, to the world's leading superpower electing a reality TV mogul as President... it's pretty safe to say that, as a species, we haven't exactly grown wiser with age.

So, next time you think you've really f*cked up, this book will remind you: it could be so much worse...

'In dark times, it's reassuring to learn that we've always been a bunch of clueless f*cking nitwits' Stuart Heritage, author of Don't Be a Dick, Pete

'A light-touch history of moments when humans have got it spectacularly wrong... Both readable and entertaining' Telegraph