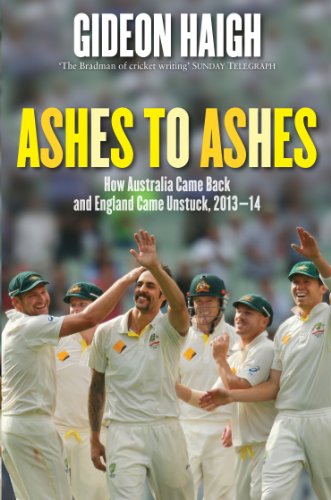 Australia versus England has always had the quality of an epic, a battle between two arch rivals as intense as a world championship. The only Test cricket series still consistently decided over five matches, its intensity is more than doubled when two series are played consecutively, as were those of 2013-14. Predicted to be a dully uneven contest beforehand, the series proved anything but, and Gideon Haigh was there to watch every ball, ten Tests in six months. Here he gives a daily report and analysis of the play, accompanied by essays on the context, the controversies and the issues surrounding the series: the sacking of Australia's coach, the dropping of Warner, the vagaries of Watson and Hot Spot, the brilliance of Bell, the return of Mitchell Johnson . . .
The UK Sunday Telegraph calls Gideon Haigh 'the Bradman of cricket writing', and he doesn't disappoint with this non-partisan account. Even if you saw every day's play yourself, this insightful, witty, knowledgeable account will reveal multiple new layers, taking you straight to the best seat on the ground.