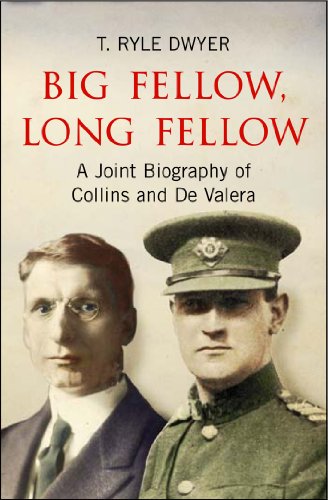 Michael Collins and Eamon de Valera were the two most charismatic leaders of the Irish revolution. This joint biography looks first at their very different upbringings and early careers. Both fought in the 1916 Easter Rising , although it is almost certain they did not meet during that tumultuous week. Their first encounter came when Collins had been released from jail after the rising but de Valera was still inside. Collins was one of those who wanted to run a Sinn Féin candidate in the Longford by-election of 1917. De Valera and other leaders opposed this initiative but the Collins group went ahead anyway and the candidate won narrowly. The incident typified the relationship between the two men: they were vastly different in temperament and style. But it was precisely in their differences and contradictions that their fascination lay. De Valera, the political pragmatist, hoped to secure independence through political agitation, whereas the ambitious Collins, with his restless temperament and boundless energy, was an impassioned patriot who believed in terror and assassination. T. Ryle Dwyer examines the years, 1917-22 through the twists and turns of their careers. In an epilogue, he considers the legacy of Collins on de Valera's political life.