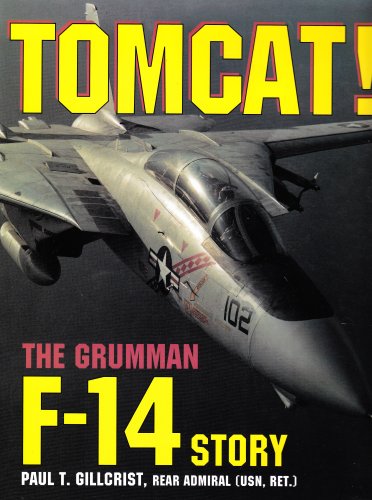 TOMCAT! The Gurmman F-14 Story is an exciting oral history of the most versatile air supremacy fighter in the world ...much of it written from the vantage point of the airplane's cockpit! Told in an anecdotal format, this new book is richly marbled with the salt air of fleet experience. Perhaps the F-14 program's greatest success is its overwhelming acceptance by the youngsters in the fleet. Anecdotes about the Tomcat legend abound ...expecially in the chapters devoted to its employment by the fleet in the oceans of the world. Of particular interest are the chapters dealing with the sale of Tomcats to Iran and the subsequent integration of the airplane into Iran's armed forces. On-the-scene eye witness accounts provide a unique perspective of this fascinating aspect of the Tomcat story. TOMCAT! contains over 150 photographs, most in color and never bfore published, and most of them taken by Tomcat aircrews with hand-held cameras. These provide a fascinating backdrop for the oral history contained in the book. This is not a garden variety history about an airplane. It is a sometimes heart-stopping stroy of how a controversial airplane finally made it into the hearts and minds of the fleet ...after stumbling at the starting gates of an outmoded defense acquisition system. It is the story of the best air supremacy fighter in the world! Rear Admiral Paul Gillcrist, USN (Retired), commanded a fleet fighter squadron on three carrier combat deployments to the Tonkin Gulf during which he flew 167 combat missions over Vietnam. For these he was awarded seventeen combat decorations. In his thirty-three year flying career as a fleet pilot and Navy test pilot as well, he flew 71 different U.S. and foreign tactical airplanes including the U.S. Air Force's F-104, F-105, F-106, F-15, F-16, YF-17 and F-20. He flew the Navy's F-4, F-5, F-8, F-11, F-14 and F/A-18 as well as several key foreign tactical airplanes. During his carrier flying career, which spanned an amazing twenty-seven years, he commanded a fighter squadron, a carrier air wing and was the wing commander for all Pacific Fleet fighter squadrons. He flew from sixteen carriers, and in his last flying assignment accumulated over four hundred flight hours in the Tomcat culminating, at age 51, in becoming the first flag officer to land the Tomcat on an aircraft carrier - the U.S.S. KITTYHAWK on 21 October 1980. The author of FEET WET, Reflections of a Carrier Pilot, Admiral Gillcrist is eminently qualified to write the F-14 story!